My mother was a feminist although she would never embrace that titled. Mom defined herself as mother, wife, and homemaker before teacher and scientist.

Mom studied the sciences. She held a passion for exploring biological mysteries and a talent for research and teaching. Women were not welcomed in the sciences during that post-war era. Although Mom was not threatened or abused, her raised hand and ideas were discreetly dismissed. She quietly went to class and juggled home and five children while bras were burned.

Although Mom loved the challenges teaching offered and went above and beyond the call of duty as one of the first women science teachers in the district, she saw her education and career as an insurance policy. She grew up without a father. Her widowed mother begrudgingly operated large sewing machines amongst the factory noise, monotony, and festering disappointments. If Mom was ever alone, her career could support her family without anger.

During that time, Gloria Steinem began rallying the battle cries for women’s equal rights. But Gloria did not help Mom get to class and juggle life. Mom relied on her good man for that. My dad was a man willing to support beyond empty words and a pat on the head. He was a man of action and was proud of his smart wife.

My father was a hands-on dad. He brushed mops of little girls’ hair, fed babies, and gathered soiled diapers soaking in toilets. He played on the rug with his children and managed bathtime while Mom studied. In 1963, my baby brother, the final fifth, joined our brood. I, the eldest, was six years old. Mom needed to complete her Master’s degree to secure a New York State teacher’s certification. She needed lab hours.

That memorable semester, Mom had a two-night schedule. Dad came home early so Mom could go to class while he took care of the kids. He was anxious about the lab night that always went overtime.  Mom would have a long drive home after a long day with the kids and a long night in the lab. Dad had a solution.

On lab nights, Mom fed us an early dinner and packed diapers, bottles, and a thermos of coffee. We kids were in pajamas when we tackled Dad at the door. Pillows and blankets were piled into the woody station wagon. My baby brother was placed in the “car box” in the front seat. Off we all went to college. Mom kissed each of us then disappeared into a large brick building. Dad pulled out an extension cord, coat hanger, and small black and white TV. He unfolded the back seats so that my sisters and I could arrange our “tent.” We were instructed not to wake the baby while he plugged the extension cord somewhere in or around the brick building. The TV came to life in a sea of hazy static on the dashboard. Dad untwisted the coat hanger, stuck an end into the TV, then adjusted the position until a fairly clear picture appeared. We sisters cheered. Dad sat back, feeding the baby his bottle in his arms. My sisters and I played in the back seat.

Eventually, my sisters fell asleep in the heap of blankets and pillows. The baby slept soundly in the car box. I propped my head on the back of the front seat. The glow of the TV flickered in Dad’s content face. He passed me an Oreo cookie as we watched Twelve O’Clock High.

It was late by everyone’s standards when we arrived home. I remember walking bleary-eyed out of the car and into my bed. My parents carried the other kids one by one. We each had our blankets tucked in and a kiss to send us off to sleep.

Fifty-some-odd years later, it is no longer an anomaly for women to pursue an education and career. We’ve come a long way, yet there is much more to do. It is all well and good to pursue because women should have the right, but the truth of the battle cry is ultimately for the preservation of family. I appreciate the works of Gloria Steinem and others who paved the way and modeled the courage and conviction. But I am more grateful for the women before me, like my mom, who stayed true her passion and persevered for the sake of family. And I am thankful for those, like my dad, who helped with a true heart, for the sake of family. 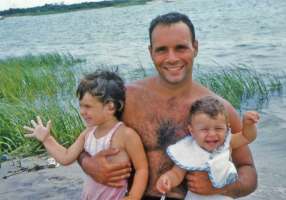 5 Comments on “The Quiet Feminists”