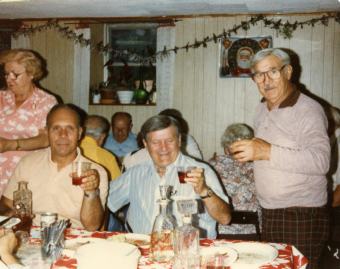 I grew up celebrating Thanksgiving Italian-American style. When I was a child, my parents piled their five kids into the station wagon and traveled over small road bridges, through the Belt Parkway and into Brooklyn where Grandma lived. Wafts of warmth and garlic could be breathed in as we climbed the stairs to her second floor flat. Grandma greeted us with wide arms and kisses at her door. Soon, cousins running up and down the stairs, aunts and uncles talking over each other, piano playing, and laughter filled the apartment. Grandma’s little kitchen bubbled, boiled, and baked. Food came out of the round-edged refrigerator, off the fire escape, and from the arms of my mother and aunts. When I was tall enough, I was allowed to put on an apron, stir a pot and taste test various dishes as they cooked.

Dinner started with appetizers during card games and football. Olive and cheese plates, eggplant caponata, and cured meats offered a prelude to kick-starting the appetite. We sacrificed loaves of Italian bread to dip and accompany the small bites.

Grandma called everyone to the tables (kids ate in the kitchen). We made the sign of the cross and said grace. As I look back at the love crowding those tables, I pause at the gratitude we hold for each other (still do). An uncle poured wine, and the macaroni–not pasta, passed down the table. Holiday and Sunday dinners always featured macaroni. Lasagna or ziti fit the fare. Tomato sauce and meatballs, sausage and maybe a braciola accompanied the macaroni. Freshly grated cheese topped the food. We wiped our palates with bread.

Once the tray of macaroni finished, it was time for the American part of the feast. Grandma and my aunts put out the turkey, stuffing, fried sweet potatoes, baked cauliflower and a jiggly tube-shaped glob of cranberry sauce. Gravy came from a jar and sat in a pretty gravy boat barely poured. We all exclaimed at how wonderful the turkey looked and how incredible the stuffing smelled. No one had an appetite for part two of the meal. There would be plenty of turkey sandwiches for later that night and the next few days. Dishes were washed and dried. Coffee percolated on the stove. Card games resumed. Uncles helped little kids crack nuts and peel oranges. Bake artichokes came out of the oven and onto the table. We opened bakery boxes filled with cannolis, chocolate cake, and an apple or pumpkin pie. Of course, there were the biscottis to dip in the coffee laced with anisette. My sisters and I collected the red and white bakery string to play cats cradle.

That was my normal when it came to Thanksgiving. Lots of people, noise, laughter, and comfort foods we all loved. Volumes of stories were told and retold around those tables. My mother carried the tradition when Grandma could no longer manage the tasks. I did not realize how different my family’s Thanksgiving was compared to other Americans until I met and married my husband, Matt. His family had German roots. He did not grow up with a tribe of aunts uncles and cousins, so holiday celebrations were subdued. Everyone fit around one table. 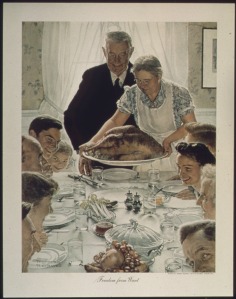 There were some remnants of old world tastes. My mother-in-law was an incredible cook. She made deviled eggs and served slices of teewurst, braunschweiger, and landjaeger from the German butcher. It was enough for just a taste — no sense spoiling appetites. The turkey roasted perfectly. The chestnut and sausage stuffing cooked inside the turkey. There were potatoes mashed with sour cream and butter, string bean casserole with creme of mushroom soup and crispy fried onion baked on top and brussel sprouts. Red cabbage and sliced bread with butter also found space on the table. Our plates held a color wheel of foods drowned in a fiercely whipped gravy from pan drippings. Desserts included homemade apple and pumpkin pies with coffee. It was a Norman Rockwell Freedom From Want style Thanksgiving. It was always great, but I did miss macaroni and the chaos.

When Matt came to his first Thanksgiving at my parents’ house, it was a culture shock. I had to admit the crowds and clamor did not daunt Matt. Folding tables added to the dining room table. At that time there were few little kids to put at the kids’ table in the kitchen. Appetizers sat in festive platters on coffee tables for easy access nibblings. I warned Matt to pace himself, but the foods were so tasty. We sat down, said grace, poured wine and passed the macaroni, sauce, meatballs, and sausage. We dipped bread in the sauce to wipe the plates clean. Grandma raised her eyebrows when Matt asked if there was butter for the bread. Vegetables and stuffing appeared as the someone sliced the turkey. Matt liked the fried sweet potatoes, and he tried the baked broccoli and eggplant parmesan. He had enough manners to not ask about the mashed potatoes but could not help to look up and down the table for gravy.

“What do you need gravy for?” my father asked. “Put sauce on the turkey and stuffing. It’s better that way.” 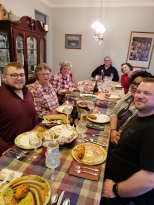 Over the years, Thanksgiving has taken on additions and subtractions. Traditions adjust as families evolve. Stories are still shared. I enjoy hosting the holiday. Matt prides himself on grilling the turkey and making an au jus gravy. My daughters require gluten free dairy free and vegetarian dishes. My sister-in-law brings red cabbage and prepares a chestnut and sausage stuffing that would make her mom proud. I make a variety of sides including the cranberry sauce with oranges and ginger. With all the shopping and prepping I include a macaroni dish complete with a light marinara sauce. I leave out the meatballs and sausage but mop up my plate with bread. Matt and his sister prefer to butter their bread.

The beauty of Thanksgiving gives us pause to ponder our many blessings– the food we eat, a roof over our heads, and the people we love.

Categories: Back in the Day Stories, Ramblings & Writing