American Venice was born of a land developer’s dream. He built homes on the Copiague’s marshland along the south shore of Long Island. A series of backyard canals led out to the Great South Bay. There were  Venetian-style bridges above the canals giving the neighborhood a European flare.

Unfortunately, the Great Depression doomed the developer’s dream. Fortunately, my grandfather and his brother-in-law, Uncle Billy, found a bargain.  They scraped together $400 and bought a little cottage with canal rights in American Venice, an hour’s drive from their Brooklyn home. It was called The Country House. It was 1942.

The Country House soon became the center of family 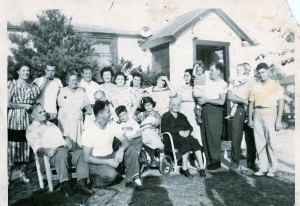 summer activity. Family included tribes of brothers, sisters, aunts, uncles, cousins, and anyone else who was considered a relation.   My dad, his siblings and cousins hold their greatest childhood memories from summers at The Country House. They swam, fished, clammed, and rowed down the canals and into the bay. The house swelled with cots, singing, card games, and food.

The Country House remained the center of activity during my childhood. My family and Aunt Betty’s family lived nearby The Country House. Everyone else traveled from Brooklyn for days, weekends, or weeks. My grandma was always there.

The Country House had an opened floor plan. Tall bookshelves separated the eat-in-kitchen from the family room. The structure dared kids to climb to the top to “spy” on the grown-up card games and meals. The upstairs had three small bedrooms and a large foyer where most of the kids slept. It was very easy to climb out of the bedroom windows and hide on the ledge.

On rainy days, when Grandma had had it with a dozen children racing up and down the stairs and climbing on bookshelves, she would hand out rolls of salami and wave her wooden spoon suggesting that we play charades.  Our charade games always turned into a ruckus and ended with Grandma shouting for us to play Scrabble, cards, anything to just quiet down. At last, she would relinquish and let us run out in the rain.

At night, Grandma cooked the fish we caught, and a dad would overcook a hamburger or hot dog on a charcoal grill. We’d play catch or Ringolevio until the fireflies came out. On Friday nights we invaded Carvel and came home with chocolate faces and a bag of flying saucers. Some nights the station wagons were packed with pillows and blankets. The kids would play at the Drive-In playground in pajamas before watching the cartoon that previewed before the main feature. Most of the kids would be asleep with popcorn scattered in the blankets by the time the movie started.

One night a season, we would drive out to Jones Beach. We dressed in our best summer clothes. All the kids, moms, and dads, as well as Aunt Kate, who could not hear but enjoyed being in the happy company, came to see Guy Lombardo’s chug to the outdoor theater in his mahogany speedboat. My dad and uncles marveled at the boat’s brightwork and “classic lines.” Guy Lombardo arrived dry and dressed in his tuxedo, welcomed us all to the show, and lead the orchestra. We saw beautiful musical productions such as South Pacific, The King and I, and The Sound of Music.

Summers were full of long, playful, salty days and sweet loving nights in the company of my abundant family.

Time marched forward and our lives steered us in different paths.  Most of Grandma’s contemporaries no longer traveled or had passed on. Grandma rented the Country House and moved from Brooklyn to Sayville, a Long Island suburb, to be closer to her children, grandchildren, and her bonus—great-grandchildren.

In 1982, my husband, Matt, and I moved back home to Long Island after living in Pennsylvania.  Grandma offered to sell us The Country House. I was so excited to think of starting a family in such a happy place. I couldn’t wait to show my husband.

The windows, walls, electric, plumbing—everything needed replacement. The flag pole was missing, the patio was torn up, and cesspool problems were obvious. Everything seemed so small. It was not The Country House of my childhood. Sadly, we passed on Grandma’s offer.

The Country Hose remains a wonderful memory. It was the place filled the definition of family, fun, and love. It could have been anywhere—a cottage near a lake, a farmhouse, a duplex in Queens. Location did not matter.  What filled that little house mattered—folks who truly enjoyed each other’s company, the meals shared, the stories told, the children’s play, the simple fun. I may never be able to sit under the shade of that old climbing tree to wrap my arms around my children and grandchildren, but I was able to recreate that love-wrap in my own backyard.