A Ghost Story- a retelling

I had a few requests to repost this story. 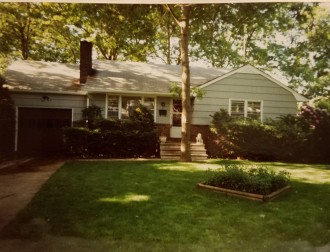 It was a cozy two-bedroom cottage on a dead-end street. It was my husband’s, Matt, grandparents’ house. In 1980, his grandmother, Oma, died quietly in her bed.  Six months later, Opa passed away in the guest room of an old acquaintance in Florida.  His body was shipped to New York and laid to rest next to his wife of 62 years.  Matt’s mother and sister cleared the house of clutter and photographs. Loose change and small bills were discovered in between cushions and in deep drawers. Furniture and mattresses remained for tenants—two young bachelors who happened to be our high school friends.

The tenants jokingly reported that the house was noisy. They described the attic creaking, doors slamming on windless nights, and faucets gushing.  The showerhead spewed rust and debris when one of the young men joined his girlfriend in the shower. They blamed the mishaps on Opa’s ghost. One night the same guy teased his girlfriend by shouting salutations to the ghost while stomping into the basement to retrieve his laundry. He “heard” tapping in the dark shadows of the basement.  He “saw” the coconut heads the old man had carved and painted dance on the workbench. He raced out of the basement, grabbed the girlfriend and left the house forever without his laundry.  The remaining tenant shrugged it off as a drunken hallucination and quickly invited another pal to share the rent.  Both young men remained cognizant yet unfazed by the clatter.

Matt and I took over the rental in 1982. We cleared the attic, garage, and basement, threw out the mattresses, and gave away furniture.  A fresh coat of paint uplifted the house’s disposition. I brought our first baby girl over the threshold. The little house felt like home. It remained noisy, though.  It was not sinister, but rather restlessly groaning. Someone suggested we get the house blessed. Matt replied that if the aberration was his grandfather, a staunch Lutheran, a Catholic priest blessing his house would only piss him off.

Because Matt’s mother was reluctant to sell her parents’ house, we started to look for our own home in the early fall of 1983. One Saturday afternoon, I finished cleaning the little kitchen.  The counters were cleared and washed, the stovetop cleaned and the floor mopped. Sara, now 8-months old, napped, while Matt mowed the back lawn.  I turned on the living room TV so Sara may hear voices. I walked out the front door and stopped Matt from mowing to report that the appointments with a realtor were confirmed. We could leave after Sara woke from her nap. I walked through the back door and into the kitchen.

Something was not right.  Opa’s apfel-pfannkuchen-pfanne (apple pancake pan) sat on the stovetop. I had never used that pan since it was not coated in Teflon.  How did it get there? It was last seen buried in a lower cabinet. But, now, here it was on the stovetop. Then I noticed the quiet. The outside mowing and nearby traffic were silent. The TV was off.  It was clicked off!  How does a TV click itself off? I rushed to the baby’s room.  Sara contently slept. Her great grandma’s crochet blanket gently rose with each little breath.  I called Matt inside.

We eventually theorized that Opa’s ghost was trying to make the house homey for us.  It took a little while, but we were able to convince Matt’s mother to sell us the house, at a fair market price, of course. Our home settled down and stayed quiet and content.

Within ten years we remodeled the kitchen and bathroom, added a sun porch, replaced the roof and finished the basement. Matt was the designer and master carpenter. I brought two more baby girls into our cozy home. The yard was filled with a playset, sandbox and bunny hutch.  It was a wonderful home, but we were bursting out of the old seams. We quickly sold our home, packed and cleared out.  My girls held their bunnies as we drove to a bigger house and spacious yard 25 miles away. We forgot nothing, except the ghost.

Five years later, the little house burned down. The young family living in it escaped unharmed.  They rebuilt a lovely colonial style house. There was no trace of our little cottage.

A few years later, my sister, Diana, discovered that a colleague was related to the couple who bought the house.

“What a shame that the little house burned down,” said Diana.

“It was inevitable,” was the reply.

“It was the pesky ghost who sparked the fire.”

Categories: Back in the Day Stories