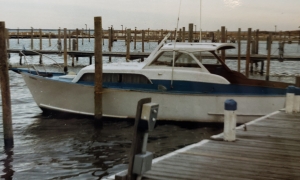 Recap The Boat Part 1 from here.

When Matt handed over that dollar to buy the Sumner Craft, a year-long series of events unfolded. My mother agreed to let The Boat remain in the front yard during its renovation. Matt immediately assessed needs and obstacles. The Boat was a heap of Humpty Dumpty parts and pieces. Just about every moving part needed attention and/or replacement. Dad had two diesel engines and a transmission in the garage to cobble together. Matt became the force in putting it all back together again. He had the vision, the know-how, my dad with experience and friends with enthusiasm and added strong backs. I kept home and kids in order, and my mom practiced patience as she witnessed the dumping of debris on her front lawn. The garage became the motor workshop. There were tools, springs, and clamps everywhere.

The hull was sound and tight, but it needed a flame stripping and many coats of paint. It was a frigid winter. Matt’s beer froze as he toiled outside. The rotten top over the deck had to go. Dad and Matt easily lifted and threw it off the boat. It fell crashing to the lawn. They had to build a practical replacement. They drew designs and constructed cardboard models to render the best possible solution. A flying bridge was settled on where the captain could steer and his first mate and little crew members could ride.

Looking back, I am astounded as to the amount of energy we had at that time. Matt worked on The Boat and renovated our kitchen in between working and playing with our two little girls. I juggled home and kids, a playgroup business, a part-time early intervention caseload, and wrote a regular column. I became pregnant with my third baby that winter, and Matt’s dad had passed away.

When a family grows, home and boat must evolve.  Our two-year-old had no patience for the leisure sailboat rides. We needed to get to a beach destination ASAP. The Boat would solve that problem. Reluctantly, we sold our 26-foot sailboat. It was a cozy vessel with a cabin we could camp in and netting all around the lifelines, making it look like a floating playpen.

By early summer, Matt and Dad had the new flying bridge built on The Boat. The exterior gleamed. The Boat looked beautiful. Even Mom had to admit it, before noting the incredible mess on the lawn and in the garage.

An engine transplant was the next big obstacle.

The Boat was launched in the Lands End Marina just a mile away. The refurbished diesel engine was hoisted with two come-along winches and pulleys in the garage, and placed in a friend’s pickup truck. The marina used a crane to raise the unusable engine from The Boat and put it in the truck then took the new one with a newly rebuilt transmission from the truck to its new bed in the belly of the boat. Matt and Dad connected, screwed, tighten, timed,  and debated. An old-timer from the marina laughed and predicted they would not get the job done in a day.

“Nobody gets a diesel in and running the first time,” he said.

The motor turned over. The familiar puh-rump-puh-rump-puh-rump cough and gages confirmed life. The men hovered watching the pistons pump and fan belt whirl. The Boat rumbled out of the canal but soon limped back. The transmission kept slipping. 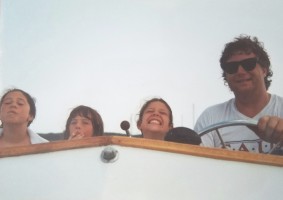 Matt and his all-girl crew

The men scratch their heads, and further debate ensued. Eventually, they added more transmission fluid. Ignition. More puh-rump-puh-rump-puh-rump rumbling. The gauge needles danced. The Boat chugged out of the canal under its own power and smoothly powered through the bay. Cheers!

It was a great boat. We spent terrific summers and autumns camping on it, fishing from it, traveling to and from beaches in it. The flying bridge proved to be a great place to escape the noise and that subtle reek of diesel fuel.  It was also an excellent bird’s-eye view of where we were going. Every season’s end, we had it pulled from the water and let it sit as a winter lawn ornament in our yard. Matt spent the spring tinkering, sanding, and polishing. The Boat was not without its issues, but we never needed a tow to shore or had to repair at sea. It served us well. After a year or two, we christened The Boat Tre Sorelle (Three Sisters). It finally got a name proudly painted on its transom. 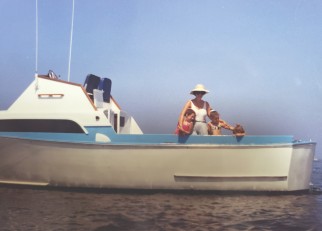 As a side note-the unuseable engine came to live in my dad’s garage for years.

Categories: Back in the Day Stories